Written by Riley Stephenson on April 17, 2020. Posted in General. 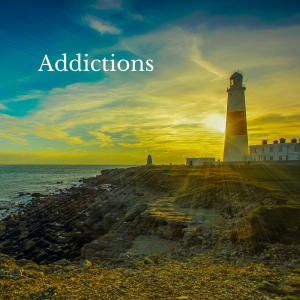 Since the times of the Ancient Egyptians man has been guided home, safely, by light houses. You see a lighthouse doesn’t just mark a dangerous coastline, but it shows where there is safe entry into the harbor. The light doesn’t eliminate the danger. Rather, it makes the danger ineffective by showing the traveler the safe path.

Think about what would happen if the captain of a boat was in a dense fog at night and instead of trying to look for the lighthouse, he tried to look for the danger instead. What do you think would happen? He would crash. Obviously this sounds ridiculous! Why would anyone look for a rocky coastline underwater, at night, in a fog?

Well, as crazy as that sounds, we do this every day in our lives – specifically with addictions. We begin down a familiar path. We know the path is littered with traps. The traps are the same every time. But instead of trying to look for the light, we try and stare at the trap – the addiction – and hope by seeing it we can avoid it.

The truth is, as long as you stare at the problems in your life that keep you bound, they will always own you. God made us to be ruled by the Spirit, but when man first sinned we became in bondage to our senses. Suddenly, everything we learned came from what we could feel, see, taste or hear. But when Jesus died on the cross, He gave us back our authority over our senses. 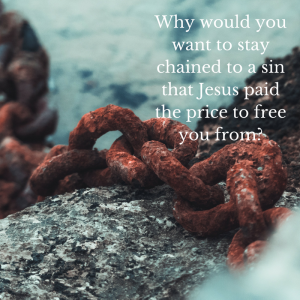 The second that you become a Christian, you no longer have to be a slave to any addictions. But just like the captain of that boat has to choose to follow the lighthouse safely home, so do we.

Romans 6:1-3 says “Well then, should we keep sinning so that God can show us more and more of His wonderful grace? Of course not! Since we have died to sin, how can we continue to live in it?” Why would you want to stay chained to a sin that Jesus paid the price to free you from? We have all dealt with some kind of addiction in our lives. I know how powerful they can feel. It doesn’t matter the addiction, it feels like you can’t escape no matter what you do.

1 Corinthians 10:13 says “The temptations in your life are no different from what others experience. And God is faithful. He will not allow the temptation to be more than you can stand. When you are tempted, he will show you a way out so that you can endure.” Do not allow the devil to convince you that your addiction is too strong for you to defeat. Do not allow shame to make you give up and no longer fight to be free.

2 Corinthians 10:4-5 says “We use God’s mighty weapons, not worldly weapons, to knock down the strongholds of human reasoning and to destroy false arguments. When you accepted Jesus as your Savior, He gave you His authority. He gave you His name to use to overcome the devil and his addictions. 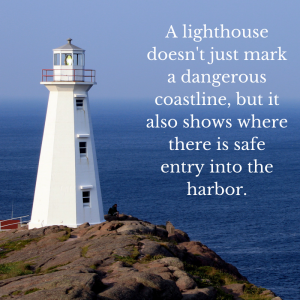 Philippians 2:10 says “That at the name of Jesus every knee should bow, in the heaven and on earth and under the earth.” If an addiction has taken control of your life, don’t stare at the problem and obsess over how to escape from its hold. Stare at Jesus. Keep confessing the Word and His Holy name over your life.

Psalm 119:105 says “Your word is a lamp to my feet and a light to my path.” Following this path is a journey, just like this bridge I’ve been walking on. Sometimes you may stumble along the way. But whatever happens, pick yourself back up, forget about whatever tripped you up and follow his light safely home.