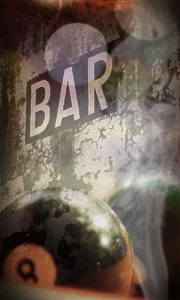 I was at a church one weekend leading evangelism training sessions, and after the Saturday morning meeting, we went out into the city for the day to minister to people about Jesus. That evening, as we continued walking the streets, I started hearing in my spirit the letters “VFW” over and over again. The impression persisted, so I asked one of the ladies who lived in the city if they had a VFW there. She told me that they did.

I told the group that I felt like we should go to the VFW, so off we went. As we walked into the building, we saw people playing pool. Others were standing at the bar, and there was a big group sitting at a table.

I walked up to the people at the table and began ministering to the whole group. At first they all listened, but when I started quoting Scripture, half of them started talking among themselves. But there was one woman standing near me who was listening intently. This woman was holding a beer mug and a lit cigarette, both in one hand, and she kept right on smoking and drinking as I talked. I was astonished that she could do all that with one hand!

But this lady heard the gospel message, and when I finished talking, she prayed to receive Jesus! I knew that God’s word would not return void and that it would prosper in her life.

Several months later I saw the pastors from the church where I had taught, and they told me that they had seen the lady from the VFW. She told the pastors that at the time we had seen her, she had been going to church and also going to the bars. She had been riding the fence with her faith. When we came into the VFW that night, this woman said she knew it was a sign from God. She rededicated her life to Jesus that night, quit going to the bars and has been in church ever since. Glory to God! I believe the Lord sent us there for that one lady!

Being led by God’s Spirit is the most adventurous and rewarding life! Open your heart to hear what the Spirit is saying to you today!